Blog: Tyrosine kinase inhibitors can have an effect on platelet function

Blog: Tyrosine kinase inhibitors can have an effect on platelet function

Tyrosine kinase inhibitors (TKIs) are widely used as a targeted strategy for cancer treatment. However, due to their broad kinase target spectrum, most TKIs inevitably have off-target effects. Platelet function has been shown to be inhibited by TKIs, as they rely on the activity of several tyrosine kinases, including Tec, Btk, SFK, Lyn, Fyn, Syk. 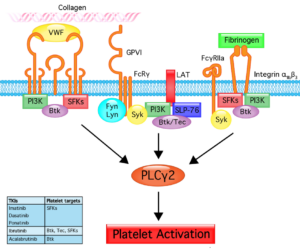 A decreased platelet count and platelet dysfunction, resulting in bleeding, has been observed in some patients taking TKIs. The most investigated TKI due to its strong effect on platelet function is ibrutinib, an orally administered irreversible inhibitor of Bruton’s tyrosine kinase (Btk) and its second-generation inhibitor acalabrutinib. Other TKIs that target the oncogenic kinase BCR-ABL, such as imatinib, dasatinib and ponatinib also affect platelet function.

Ibrutinib was FDA approved in 2013 to treat mantle cell lymphoma and in 2014 approval was extended to treat chronic lymphocytic leukaemia (CLL), becoming the first approved drug for this condition. Early clinical studies have reported an increased risk of bleeding in up to 50% of patients taking ibrutinib, wherein serious cases some patients have experienced major haemorrhage. It is theorised that ibrutinib causes off-target effects by inhibiting both Btk and Tec, which could explain its strong effects observed in platelets. The second-generation Btk inhibitor, acalabrutinib, which was FDA approved in 2019 to treat CLL, is a more selective inhibitor with fewer major bleeding events being reported. This is confirmed in platelet aggregation studies that have shown acalabrutinib inducing less platelet inhibition in comparsion to ibrutinib.

The effects of Ibrutinib and Acalabrutinib on collagen-induced platelet aggregation

Imatinib is the first TKI developed to target oncogenic tyrosine kinase BCR-ABL for the treatment of chronic myeloid leukaemia (CML). It is known to inhibit the platelet-derived growth factor receptor (PDGFR) downstream signalling via PI3K/Atk and MAPK/Erk. A second generation BCL-ABL inhibitor, known as dasatinib, was developed to overcome the issue of patients becoming resistant and relapsing after Imatinib therapy. 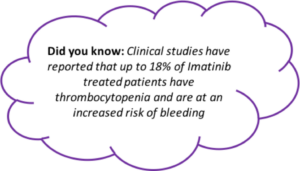 Dasatinib has caused thrombocytopenia and platelet dysfunction by inhibiting SFK, PLCg2 and PI3K signalling. As a result, dasatinib exhibits a higher antiplatelet activity than imatinib and a relatively high bleeding incidence in dasatinib-treated patients has been observed.

Finally, ponatinib is a third generation BRC-ABL inhibitor also used to treat CML but has shown to be the most potent platelet inhibitor. Research suggests that ponatinib suppresses ITAM signalling by inhibiting the tyrosine kinases Src, Lyn, Syk and Btk. Overall, BCL-ABL inhibitors developed for treating CML seem to have a strong inhibitory effect on platelet function.

If you are looking to investigate the effects of TKIs or other new compounds in development on platelet function to understand the potential for platelet-related side-effects, Platelet Services can provide this capability for you. We do this by measuring platelet aggregation, or other indices of platelet function, in platelet-rich plasma or whole blood against different drug concentrations. Differential effects of compounds on different stimuli of platelet activation can also be explored. Inclusion of reference compounds with known anti-platelet effects allows any findings to be placed in context. Click here to find out more.